Kids love collectable toys. The excitement of discovering mystery figures and building collections to play with and swap, adds an extra element of fun to collectable ranges. Ready2Robot allows kids to build, swap, and battle interchangeable, mix & match mechbot creations and collect warrior pilots that come in their own slime pod. Add a bot blaster that shoots missiles and get ready for an epic robot battle.


The Ready2Robot collection lets you build, mix & match your own custom bots, and battle your friends in a robot-brawl. The arms, legs, weapons and pilots are all interchangeable so you can create your ideal battling robot. 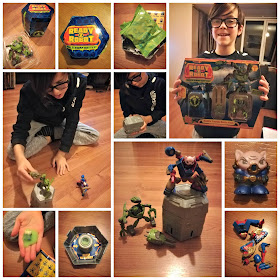 Freddy was very pleased to receive a Double Trouble Ready2Robot Series 1 Battle Pack, which provides everything you need for the ultimate one on one battle! Armed with 2 mechbots and 2 Pilots (one is a mystery figure and one is visible in the box) you can build and battle right out of the box.

The mystery mechbot comes in a special four layered pod that can be unboxed to reveal all the individual  parts of the mystery bot. The unboxing was a big part of the enjoyment of this toy, as each layer was explored to reveal the individually packaged component parts. The slime pod, which is fitted into the base of the base, hides the pilot and Freddy really enjoyed getting him out of the green goo. Freddy unboxed Tenderizer and Spacehog to battle against his Tank mechbot and Three Pete pilot in a Double Trouble battle. The pod is reusable and can be linked to other pods to create battle arenas or it could be used as a display stand for your favourite mechbot.

All the limbs, bodies and weapons fit together in any combination, so you can customize your mechbots for battles in hundreds of different ways. The pilots also fit into any bot so you can customise your battles using your favourites. The Battle Pack is a good stand alone toy in its own right, but the collection can be added to to increase the potential for mixing and matching and battling with different bots.

Freddy was really impressed with the bot blaster that shoots real missiles. He used it to fire at both his mechbots in a last-man-standing battle. The little toys themselves look really impressive with good attention to the detailing. This toy combines robots, battling, unboxing surprises and slime - that is pretty much the perfect combination! 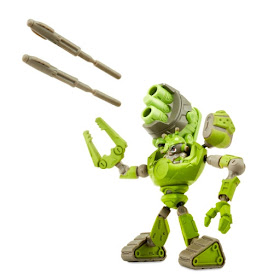 For more information and to watch an animated battle that brings the characters to life visit: www.ready2robot.com. The Double Trouble Battle Pack retails at £19.99, but is currently on offer at Smyths Toys for £14.99.

The Ready2Robot range is available from stockists such as Smyth's Toys:
www.smythstoys.com/uk/en-gb/toys/construction-and-cars/robots/ready-2-robot/c/ready-2-robot
Inside the Wendy House at Friday, November 16, 2018
Share
›
Home
View web version